You are at:Home»Cover Story»A Big Change at John Henry’s Results in… NO Major Changes! 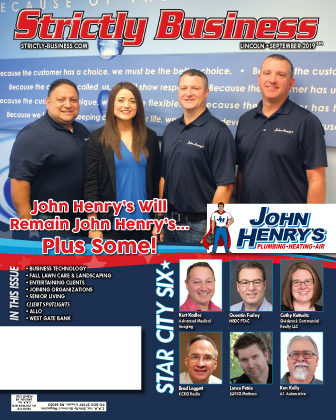 Typically, companies only make a big deal when there are major changes happening. Seldom do companies step into the spotlight to announce that we should actually expect no changes at all…but John Henry’s is doing just that.

Yes, there is a succession plan taking place as Deb and John Henry (Jack) Zohner go further into semi-retirement and their daughter Lindsey Reinke and her husband Joe officially take over ownership of John Henry’s Plumbing, Heating, and Air Conditioning. Selling John Henry’s is big news, however, we can be assured John Henry’s will remain the same quality company it’s always been. That’s because John Henry’s will remain a family and employee owned business. Plus, they have a deeply embedded culture that so many people have come to admire.

Selling John Henry’s is a heartfelt thing, but Jack Zohner summed it up in his own special way: “Deb and I had our moment in the spotlight. It’s time for others to enjoy it and continue the John Henry’s legacy. They’ve worked hard and deserve the opportunity.”

Deb and Jack started John Henry’s 23 years ago in their home. John Henry’s has been their baby. They nurtured it and watched it grow. Their main goal was treating others the way they wanted to be treated. The John Henry’s team became their extended family. They brought many of their team into the trades and watched those careers grow.

Lindsey has closely watched John Henry’s grow from day one and has worked in the business for 18 years in various capacities. Lindsey fully understands what it takes to maintain their company culture. Lindsey gets it. Running a business is in her bloodline!

As president, Lindsey said, “I see no major changes in the future. We work hard to continuously improve our company culture. It’s who we are. We have a close-knit team that works well together. We have fun and really enjoy our careers. Providing excellent customer service and saving lives will always be our top priority. Being a good neighbor to our community is also important.”

Jack Zohner began really implementing his hands-off ownership approach five years ago. He said, “I’ve seen too many companies struggle with company culture after the original owners left. This hands-off approach encouraged managers to become deeply involved in setting the culture. I have faith in them.”

Deb and Jack plan to continue volunteering part time at John Henry’s and spending more valuable time with their 15 grandchildren.

Congratulations to Deb and Jack Zohner for a job well done!