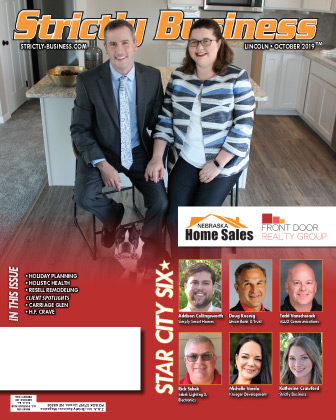 Russ Meyer has deep roots in Lincoln and Nebraska. Russ is a third generation Lincolnite and a fifth generation Nebraskan. He started his first business when he was nine years old designing his own line of Christmas cards and selling them door-to-door. As the business grew, he hired his siblings and friends to color his hand-drawn cards.

Russ’ most recent business endeavor is Front Door Realty Group of Nebraska Home Sales. Nebraska Home Sales opened its doors as a small brokerage in 2004 with a mission of providing excellent service to buyers and sellers. Russ joined the brokerage as a REALTOR® in 2012 and earned his broker’s license in 2016. In the last seven and a half years, he has helped more than 350 Lincolnites buy or sell their home.

As a graduate of the University of Nebraska’s College of Architecture, Russ has an eye for design that compliments his background in construction and carpentry. Russ understands the details of how a home goes together. This makes him an excellent builder’s representative as well as an educator and resource for his buyers. He uses these skills to cast a vision for his clients. Buying, selling, building, or investing, you can trust Russ and his team to guide you and advocate for you in all of your real estate transactions.

One of Russ’ primary passions is urban infill, building new houses in established neighborhoods that make good use of available land. He worked on two of Lincoln’s most recent projects, Antelope Square off of 22nd and Q Street. and Cooper Commons at 9th and D Street. As the listing agent for these two projects, he helped NeighborWorks Lincoln sell these homes, most of which were purchased by low to moderate income first-time homebuyers, and the concept of pocket neighborhoods.

His most recent project is as co-developer and listing agent for a new pocket development of six homes near 56th and Van Dorn called the Roose Project, which is due to go on the market later this year. Located near the bike trail and six blocks from the dam at Holmes Lake, these homes have easy access to many of Lincoln’s amenities. Roose Project will have two single family residence homes and two sets of townhomes each with three bedrooms, two and a half bathrooms, and 1,550–1,650 square feet. Each home will have an attached three-car garage, and the development will include additional off-street guest parking and a homeowner’s association.

If you’re interested in learning more about what Front Door Realty Group can offer you in your real estate transaction, seller or buyer, call Russ Meyer at (402) 310-8262.