Berry Law (berrylawfirm.com) attorneys Montana Crow, David Hoeser, and Carey Collingham officially passed the Nebraska State Bar exam as of September 3, allowing them to practice law in the state. Crow and Hoeser will practice Veterans disability law at Berry Law, while Cunningham will focus on personal-injury cases and related civil matters. Their swearing-in ceremony was held at the Pinewood Bowl on September 15—the same day they officially became attorneys at Berry Law.

Crow graduated from Creighton University School of Law in May 2020. There, she was the Senior Lead Articles Editor, the Legal Research and Writing Moot Court Competition runner-up, and was part of the Phi Delta Phi International Legal Honor Society. Hoeser served our country in the U.S. Army for four years following high school and later attended the University of Nebraska College of law, graduating in May 2020. As an Army Veteran, he looks forward to helping fellow Veterans get the disability benefits they deserve. Collingham also graduated from the University of Nebraska College of Law and has been a law clerk for Berry Law for the last two summers. He suffered severe injuries in multiple car accidents a few years ago, making him unable to play the cello professionally. He is now helping injured persons take back control of their lives.

Berry Law was founded in 1965 by legendary attorney John S. Berry, Sr. With more than 250 years of combined legal experience, Berry Law is well-equipped to handle the most serious legal needs. For more information, visit berrylawfirm.com, call (402) 466-8444, or email marketing@jsberrylaw.com. 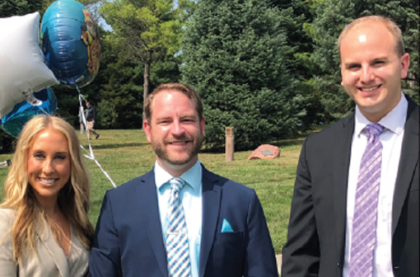