ComPro – Medicare for All

As the 2020 election season moves forward, we are going to hear the phrase “Medicare for All” many times. Here is a quick look at what Medicare for All means.

The 116th Congress began in January, 2019 and continues through the 2020 elections until January, 2021. There are currently seven bills in the Senate and seven in the House of Representatives that have been introduced as Medicare for All solutions to replace or change our current systems for accessing health insurance.

These bills can be grouped into four categories:

Most of the news has been focused on Single Payer models, but most of the legislation is suggesting a hybrid solution where a Public Plan Option is available and “rescues” the Affordable Care Act. This is a highly political issue. Thirteen of the 14 bills have been introduced by Democrats.

I strongly urge you to be well versed on how this can impact your access to health insurance, your access to medical providers, your taxes, and the manner in which you operate your business! 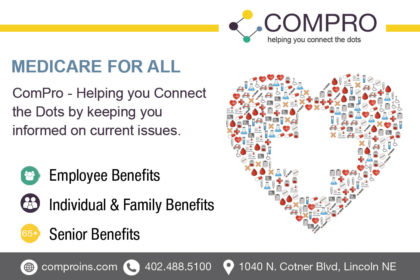 Click here for all press, reviews & features about ComPro Insurance