You are at:Home»Spotlights»Raising Cane’s – Community Driven

Raising Cane’s (www.raisingcanes.com) prides themselves on providing great chicken finger meals by serving fresh, never frozen chicken tenderloins that have been marinated for 24-hours, each battered and seasoned by hand, and cooked to order. At Raising Cane’s, you get an exceptionally high quality product served quickly and conveniently. They can do this because of their limited menu offering. The specialized systems developed by Raising Cane’s allow them to maintain a level of quality unmatched in the industry. Their commitment to this concept allows them to never compromise their quality, cut corners, or clutter their menu with new products that do not fit their core menu offering.

Each Raising Cane’s® gives back to the communities they are located in. The Lincoln Raising Cane’s franchise—Southern Hospitality Ventures Inc.—was opened in 2006 by Justin and Jennifer Jones, who moved to the Midwest from Louisiana. Since then, the franchise has given back over $1.8 million to their restaurants communities. Since opening their first location, they have set out to make a change in their community by becoming active community leaders. 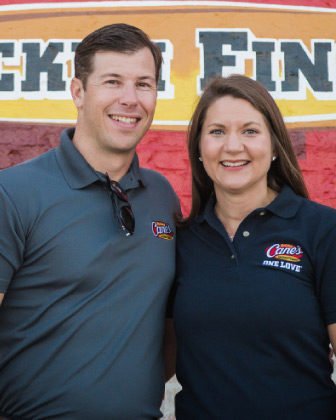 The vision of Raising Cane’s is to be known as the brand for quality chicken finger meals, a great Crew, cool culture, and active community involvement.

Raising Cane’s has been partnering with KLKN’s Channel 8 and Eakes for its school supply drive, Stuff the Bus. In the most recent drive, enough school supplies were donated to provide more than 2,100 students with the tools they need to start the school year off right, and over $5,200 in donations were collected and given to Lincoln public and private schools.

In addition, 2018 was the 12th year the Lincoln Raising Cane’s franchise held a coat drive at their restaurants to be given to the People City Mission’s Help Center. Through these efforts, over 1,800 winter coats were donated. Since 2007, over 21,000 winter coats have been donated to those in need in their restaurants’ communities.

In partnership with Cell Phones for Soldiers, Raising Cane’s gave more than 109,000 minutes in calling cards from recycled phones and over $25,700 in monetary donations to the Nebraska National Guard Foundation in 2018. Since 2009, Raising Cane’s has raised over 822,000 minutes for Nebraska Troops and over $102,600 to support the needs of Nebraska Veterans and their families.

Click here for all press, reviews & features about Raising Cane's